If you’re like me when you found out you were pregnant – shit scared, in total disbelief, paced up and down the house whilst shaking and biting your nails like a druggy who needs a fix.. you might want to take a read of this one.

I found out I was pregnant back last year in November (2017), on a Wednesday night; the 22nd. Something wasn’t right with me, as I spent the last couple of weeks of October and start of November sick – sick as a dog. There wasn’t a day that I didn’t feel sick or be sick, I was fatigued to the max, my hormones and moods were worse than they’d ever been and I couldn’t stomach certain smells or food. I was constantly off work – I kept putting it down to a stomach bug, considering I worked in a Nursery and we had the bug going around. Why would I think it could be anything other than that? I’d also started a new course of medication with side effects of nausea so I guessed it was a combination of the both and my body adjusting. I got to the point where I was fed up and I went to the doctors.

The doctor I saw made me question why he spent so much money and so many years training to be a doctor. A young girl of my age with the symptoms I described, I’d have tested to see if she was pregnant. ‘Sickness/nausea, fatigue, headaches, can’t stomach food/drink, no energy, sexually active, sleeping non stop, dizziness, heartburn, pains in tummy, late on period’… but what do I know? I’m no doctor. Guess what he told me it was? Anxiety – that it was all in my head and that once my body was used to the new meds; then I’d be fine. I wanted to shout at him, he made me feel like I was stupid and he made me feel as if I was ‘wasting time’. I went home and drank a strawberry milkshake. Wait, what? I HATED anything strawberry flavour and I HATED milkshake. I’d drank so many Yazoo milkshakes, I think the bin men might’ve thought I had an addiction. I even made Ryan take me to Kaspa’s to get one, the night before I found out I was pregnant. Still no one suspected nothing. Except my sister.

My sister had been pregnant twice and suffered throughout the whole of both of her pregnancies so if anyone was to know symptoms of pregnancy – it sure was Gemma. Gemma thought I was literally just being sick and nothing else until I told her about the other symptoms whilst lying in bed, trying not to be sick for the 4th time that morning. “Have you done a pregnancy test? because you are so pregnant!” I looked her up and down, told her to shut up because there’s no chance that I was. Even though I was certain I wasn’t pregnant, I knew I had to see if I was. 4 days later I decided to give in and go get a pregnancy test, I went after work. I got home and froze. I’d convinced myself that I wasn’t pregnant but now that I was about to do a test, I hadn’t prepared myself for if it was positive.

Ryan was on his way to Heathrow ready to go on a flight until the Saturday, which was the worst timing because if I was pregnant, I had to wait a good few days before I could tell him. There was no chance I was going to tell him if I was pregnant whilst he was in another country, so I’d of had to let it sit and play over in my mind. Me and Ryan had been through a hell of a 2 years and had only been back together 5 months. Things were going amazing for us and finally we were in such a good place, having fun and enjoying being a couple and now this potential bombshell was about to go and rock us. We were planning our first holiday and talking about setting up help-to-buy ISA’s for us to have our own place. We’d always spoke of having children, but in recent months it was unsure if I’d ever be able to, so we’d got use to the idea of it always just being us two. Although things were going amazing, in recent weeks, we’d began arguing so much again to the point I was questioning what was happening. To be pregnant at a time where you’re still unsure of your relationship was difficult. This was the only thing crossing my mind as I sat and did the test. 5 minutes went by and I knew I had to pick up the test to find out but I was too scared to look and I couldn’t – I could only think of Ryan, what he’d say and how he’d react and just everything that comes with having a baby at the ages of 20 & 22. I had only just got the man I loved back, after over a year and a half of nothing but tears trying to make things work and now his baby was inside of me.

I eventually picked it up and looked.. There it was. 2 lines. I’m pregnant. There is a little person growing inside of me. I sat for ages trying to comprehend it all. I was pregnant, I was going to be having a baby and my whole life was about to change. Forever. I had convinced myself for days, weeks even, that I wasn’t pregnant and now all of a sudden, I am..

Thousands of questions and thoughts paced through my head and I could feel myself losing my mind.. “how has this happened?” (well, of course I knew how it happened!) “what’s Ryan going to say, jesus; what will he do?”, “Ryan’s not going to believe that its his”, “am I going to be a single mum?”, “how am I going to afford it?”, “how the fuck am I going to get this thing out of me in 9 months?”, “I’m going to get so fat!”, “Liam’s going to kill me.”.. the list could go on. My breathing was all over the place, I threw up, I was so dizzy and emotional and all I wanted was Ryan there with me in that moment regardless of his reaction. I heard my mum come up the stairs and go into my room, as she was coming up to watch tv with me. How the fuck was I going to sit and watch tv when there was this human inside of me?? My mum, like everyone else, can see right through me so if I thought getting into bed and acting as if that half-an-hour didn’t just happen; boy, I really was stupid. I went into my room and I didn’t even have to say anything because she knew something was up. She knew I was doing a test to find out but even she was convinced I wasn’t pregnant! So when I passed her the test… my god, I thought she was going to pass out or have a heart-attack (luckily she did neither).

She just looked at me and said nothing. She was just silent. Which honestly felt like she had been silent forever. I stood in front of her anticipating what she was about to say, I expected her to shout, or hug me or just walk out; but nothing. When she finally did say something.. “oh.” OH, after 10 minutes of silence, all she could say was ‘OH’?! Thanks mum! My mum sat with me for hours talking about everything. Me and mum had been close before this bombshell, but in that first hour of finding out, I felt closer to her than ever. She just knew what to say at the right time and when not to say anything and just hug me instead. Even though I was pregnant and it was there, right in front of me; I was still convinced it wasn’t happening.

“Naghhhh, it’s ok because I’m not pregnant so there’s nothing to worry about or think of yet; I’ve definitely just peed on the stick too much! Let me go and do the other one and this one will be negative.”

HA, WRONGGGGGG! It wasn’t negative, it was positive and I definitely hadn’t peed on the stick too much and I was definitely pregnant. Guess what happened next? I thew up, again. For like the 6-billionth time in that day alone. I just sat and laughed to myself because if I hadn’t laughed, I would’ve probably cried and not stopped. I got back into bed and just led there and mum just laughed. She was laughing because, every advert that came on tv was baby-related. Don’t you find that though?! Like, when something happens, everything on tv becomes about it. You get your period – every advert is feminine products. Trying to lose weight and craving a fatty, greasy meal – every advert is either KFC, Mcdonalds or Dominoes. Have no money – everywhere has a sale on.

Days passed, weeks passed, months passed and before I knew it I had this little bump, hearing our baby’s heartbeat, seeing it on the screen, finding out ‘it’ was a BOY and getting excited for his arrival.

A whole year on and Freddie’s now 5 months old. Sleeping through the night, teething horrendously, trying his hardest to roll over to his belly, standing on two feet when supporting him, getting stronger at holding his head up when on his belly, babbling and talking away, trying to hold his bottles, forever poking his tongue out, smiling and giggling away sitting up supported loving baby-groups, eating breakfast and just becoming the cheekiest, funniest, most gorgeous little boy ever. Things have NOT been easy for any of us, during the pregnancy and still now… but would we change it?

No we would not. 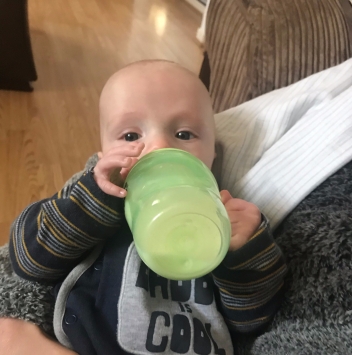 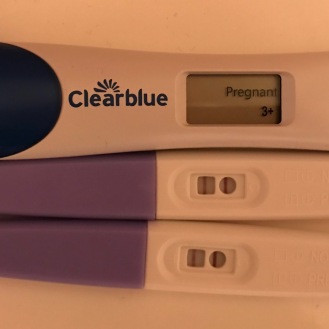 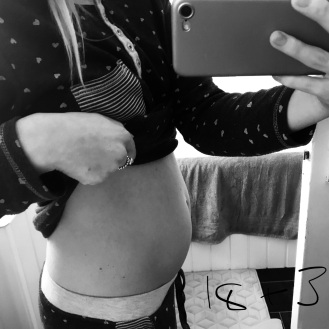 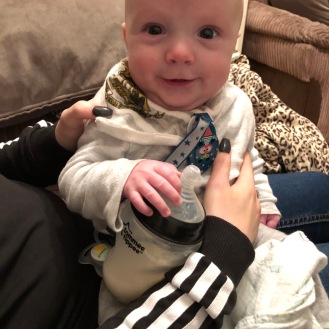 One thought on ““I’m not pregnant, I just peed on the stick too much. Right?..””

Published by I'm more than just a mum..

Welcome to my blog and thank you for visiting. I'm Chloe, I'm 22 and a first time-winging it mum to Freddie! Here, I hope to share my views and experiences on being a mum and to share some light into what it's really like. View all posts by I'm more than just a mum..